What Happens if I am Hurt in an Earthquake in California? 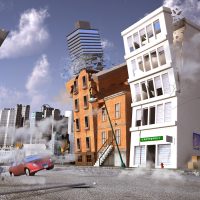 A massive 7.1 earthquake emanating from Ridgecrest rocked southern California on July 5th, following another 6.4 magnitude earthquake the day before. Independence Day revelers in Lancaster and around the Los Angeles area were all shook by the quake and can expect more aftershocks in the near future. If you were injured in one of these earthquakes or are injured in an earthquake in the future, who is liable? We’ve all heard talk about whether insurance covers “acts of God,” but most of us do not know what that actually covers and, if you are on someone else’s property, what that means for their liability. Continue reading for an exploration of earthquake injury liability in California, and contact a seasoned Lancaster premises liability attorney with any questions about possible personal injury claims in the Antelope Valley.

A building owner must keep their building earthquake-safe in California

A lawsuit in central California from a few years ago illustrates what might happen after an earthquake where a property owner was found negligent in protecting against earthquakes. A magnitude 6.5 earthquake rocked California in 2003, and two women working at a clothing store in downtown Paso Robles were crushed to death by falling bricks and plaster as they tried to flee the building. The young women’s families sued the property owners. The owners claimed that the incident was an “act of God” and that the building was in compliance with city building codes.

Notably, the city had passed an ordinance that would require the store and other brick buildings to be seismically retrofitted to protect against earthquakes, but the deadline for completion of the retrofitting was still several years away at the time of the earthquake. The case went all the way to trial. The jury unanimously found that the store owner was negligent; the owner knew the building was unreinforced and failed to act before it (predictably) collapsed. The jury ruled for the plaintiff and awarded significant damages to the families of the deceased.

The companies appealed, claiming that they had complied with all of the city building laws and thus should not have been held liable. A California state appeals court upheld the verdict, specifically noting that merely complying with city law “did not insulate owners of unreinforced building from negligence in failing to retrofit building.”

As outlandish as it may seem, in 2015 residents of an Oklahoma town successfully sued several oil & gas companies based on claims that their well-drilling caused several large earthquakes. The lawsuit was upheld by the Oklahoma Supreme Court. While the case took place in Oklahoma, the legal principles apply the same here: If you can provide evidence sufficient to show that the activities of an oil, energy, construction, or any other company that performs hazardous activities actually caused or contributed to causing an earthquake, you may be able to hold that company liable for property damage, injuries, and deaths caused by the earthquake.

Get Serious Legal Help after a Lancaster Earthquake Injury

If you have been hurt in an Antelope Valley earthquake or otherwise on someone else’s property, contact a skilled and dedicated Lancaster personal injury attorney about pursuing a claim for damages by calling the Kistler Law Firm at 661-206-6990 for a free consultation.