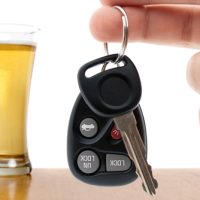 The family members of a pastor killed in a 2013 crash have filed a lawsuit against a bar that served the drunken driver that killed him. Manard Giles, 77, was the pastor of The Answer Community Church of God in Christ in Lancaster, California. Giles was on his way back from attending a church event in San Diego, along with two passengers, in his Chrysler 300. At approximately 3:30 in the morning on June 22, 2013, Giles was in a head-on collision with a Toyota Tacoma heading the wrong direction on the Antelope Valley Freeway, driven by Bradford Pate of Burbank. Giles was pronounced dead at the scene of the accident. A passenger, Mattie Lee Ferguson, 60, of Lancaster, was transported to the hospital, but ultimately died of her injuries. An additional passenger found himself trapped in the damaged car until emergency personnel could extricate him. Pate was arrested, and is currently awaiting trial, where he could receive a penalty of up to life in prison. He has been charged with two counts of murder, two counts of gross vehicular manslaughter while intoxicated, one count of DUI causing injury with a prior DUI, and a DUI over .08% blood alcohol level with a prior DUI. His previous DUI conviction was in Ventura county in 2007.

Manard’s children Wanda Giles of Victorville, Kenneth Giles of Clairemont, Limmie Giles of Rialto, and Esther Thomas Giles of San Bernardino, have brought the lawsuit for Manard’s wrongful death. While the family could sue both the club that served Pate as well as the drunken driver who caused Giles’ death, it is possible that the family has determined that Pate does not have sufficient assets to satisfy a judgment against him. It appears that the family has instead elected to sue only King King, the club where Pate had been drinking. The Giles family has alleged in their lawsuit that, at some point, King King came into possession of Pate’s truck keys, though it is unclear whether the keys were taken from Pate or whether Pate valeted his car with the club earlier in the night. Pate continued to drink at the club, located in downtown Hollywood. The lawsuit claims that, despite the fact that Pate was clearly intoxicated, King King turned over the truck keys to Pate, creating an unreasonable risk of harm to the public, a risk for the sort of harm which did, in fact, occur.

Loss of a family member in an accident with a drunk driver can be devastating. While nothing can bring back the loved one you lost, ensure that you receive any compensation you may be owed due to your loss. Contact the skilled Palmdale personal injury attorney Paul Kistler for a free consultation on your possible lawsuit at 661-206-6990.