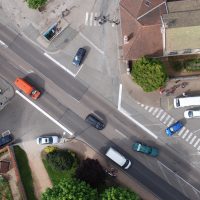 Cities and states have a duty to design and maintain safe roads and intersections. When these entities fail to carry out this duty competently, there can be tragic results, for which the responsible government office can be held liable. A recent jury verdict awarded against the City of Los Angeles based on its failure to fix a dangerous intersection is an example of this sort of liability.

The case in question, Guilmette v. City of Los Angeles, centered on a tragic car accident which occurred in San Pedro. Thomas Guilmette, a 59-year-old aerospace engineer, was on his way to work on the February 2013 morning that the accident took place. He was riding his motorcycle along Summerland Avenue, near where it intersected with Cabrillo Avenue. The driver of an SUV approached the intersection from Cabrillo, inching out into Summerland in an attempt to see if it was safe to turn left. At the time, there was no stop sign or signal on Summerland at this intersection, and street parking near the intersection was unrestricted, making it difficult for drivers coming from Cabrillo to see oncoming traffic on Summerland. Sadly, when the SUV inched out into Summerland, Guilmette clipped the front of the SUV with his motorcycle and crashed. He passed away from his injuries. According to witnesses, Guilmette was traveling at or below the speed limit at the time of the crash, and the driver of the SUV was also not cited at fault for the accident.

Under California law, cities are obligated to correct dangerous conditions on roads and at intersections, once they are aware (or should have become aware) that an intersection or road is dangerous. If cities fail to take corrective measures, then they can be held legally responsible for injuries resulting from the dangerous condition. Thomas Guilmette’s widow, Lani, filed a lawsuit against the City of Los Angeles for her husband’s wrongful death on this basis. She argued that the city had received complaints for years about the danger of the intersection, and despite announcing its intention to implement safety measures at that location, had failed to do so. The city defended itself by arguing that the accident was entirely due to the fault of both drivers, and asserted that it never had plans to alter the intersection in any way. Guilmette’s attorneys presented evidence that, as long ago as 2001, the city had acknowledged the need to improve the safety of the intersection by publicly describing a plan to restrict parking on the street near the crossing. The attorneys went so far as to confront Los Angeles city employees who took the witness stand with evidence of plans to restrict parking near the intersection, but the employees denied ever having seen those plans previously. Ultimately, the jury sided with the victim’s widow, awarding her and her son a total of $23.7 million in damages. The city has announced its intention to appeal this decision.

If you or someone you love has been injured in an accident that resulted from the city or state’s negligence in repairing or improving a dangerous road or intersection, seek legal help in getting the compensation you need by contacting the knowledgeable and experienced Palmdale personal injury attorney Paul Kistler for a consultation, at 661-206-6990.