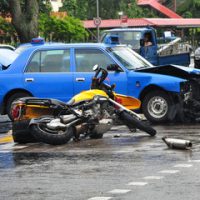 A motorcyclist was killed in a crash on the 91 Freeway last week, and police suspect that the accident was connected to the growing problem of illegal racing on Los Angeles streets. Continue reading for more about the accident and the dangers of street racing, and contact a knowledgeable California car accident attorney with any questions about possible personal injury claims.

Around 9 p.m. on a Thursday, drivers began calling 911 to report a motorcyclist traveling at excessive speeds on eastbound 91. The motorcycle crashed at Gypsum Canyon Road in Anaheim Hills near the 241 Freeway. According to witnesses, the motorcycle was racing with another vehicle prior to the crash. Preliminary reports indicated that the other vehicle, which witnesses identified as a pickup truck, cut across lanes from the right lane and collided with the motorcycle, which caused the accident. The motorcyclist suffered severe injuries and was pronounced dead at the scene.

CHP officers at the scene would not confirm that the motorcycle was definitely racing, but as of the crash they were looking for the second vehicle and continuing to investigate the cause.

According to a report by the LA Times, at least 179 people died in LA County between 2000 and 2017, including 12 deaths in 2017, as a result of illegal street racing. Less than half of those killed were the actual drivers; most were spectators, passengers, or simply pedestrians walking along the road. A majority of those killed were young males, 21 years old or younger; other deaths included a mother killed with two children aged 4 and 8.

Police say street racing is on the rise, in part due to the allure of social media popularity. Racers are becoming increasingly bold in blocking off streets and intersections for races and stunts, as well as fighting back against police, in the hopes of creating viral posts and gaining more followers.

Anyone who participates in a street race is likely to be at fault for any accidents caused and owe damages to anyone injured or killed, including passengers. Moreover, even if no one is injured, a person convicted of street racing can have their driver’s license revoked, car impounded, car insurance canceled or premiums hiked up, and face up to $1,000 in fines.

If you have been hurt in an Antelope Valley car or motorcycle crash caused by illegal street racing or other negligent or reckless driving, talk to a skilled and effective personal injury attorney about pursuing a claim for damages by calling the Kistler Law Firm in Palmdale at 661-206-6990.