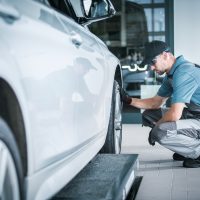 Not all car accidents are caused by negligent drivers. Many car crashes occur because a defective auto part is triggered at the worst possible moment–engines stall, brakes lock, airbags fail to deploy. Auto manufacturers that discover a defective part installed in cars already on the market will (ideally) issue a recall for the car models that have the defective part. Ford recently issued a recall for nearly 250,000 vehicles in the U.S. and another 20,000 in Mexico in connection with a faulty door latch. Read on to learn about the defective part and the recall effort, and call a seasoned Palmdale product liability and car accident lawyer if you or a loved one has been hurt as a result of an auto defect in the Antelope Valley.

Defective Ford Car Part Can Cause Door to Open While Driving

Ford recently issued a recall affecting at least 248,900 cars on the market in the U.S. The recall applies to several models sold between 2014 and 2016. The recall covers all Ford vehicles that were manufactured with a particular defective door latch, which is susceptible to cracking and failure in warm regions. A door latch affected by the heat may cause the door to fail to close correctly, even after multiple attempts, and it might allow the door to open while the car is being driven. A door unexpectedly opening while a vehicle is traveling at high speeds on the freeway can easily lead to a severe accident.

The recall applies to the following Ford sedan models:

Ford will notify owners of the recalled vehicles by May 4, 2020. In the meantime, Ford owners can check the NHTSA recall website to find out if their car is part of the recall. Affected vehicles are currently registered in at least 16 states, including California, as well as federal territories. If you own or lease one of the affected models, you can take your car into a Ford dealership for a free repair. Dealers will replace the door latch with one that does not degrade in high temperatures.

Ford stated that it is not aware of any accidents that have been caused by the faulty door latch. If you were hurt in an accident involving one of the covered Ford models, you might be entitled to damages against the auto manufacturer.

If you or a loved one has been injured by a defective auto part in California, talk to a passionate and trial-ready Palmdale products liability attorney about pursuing a claim for damages by calling the Kistler Law Firm at 661-206-6990.