Can a Passenger be Liable for a Car Accident? 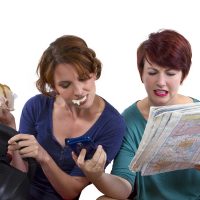 If you are injured in a car accident, you should be trying to determine who is at fault.   You have the right to have your medical bills, lost wages, pain and suffering, and other expenses covered by the person who caused your injury.   But what if it was not actually any of the drivers involved in an accident who were responsible for a car crash?   What if you were driving, but it was a passenger in your vehicle or another car involved who grabbed a driver’s arm or otherwise caused a crash?   Can you sue a passenger for causing a car accident?   Read on to learn how California will assess passenger liability for car crashes, and contact a dedicated Palmdale car accident lawyer when another’s negligence injures you or a loved one in an Antelope Valley crash.

Passengers who cause crashes can be liable for injuries

There is nothing in California law that mandates that drivers must be held responsible for car crashes.   Rather, like with any other personal injury matter, liability depends on who caused the accident to occur.   California appellate courts have upheld damages against passengers who engage in “willful interference with the driver of a vehicle so as to affect the driver’s control of the vehicle,” and who acted with knowledge that their behavior was likely to cause injury.   The question turns, then, on the behavior of the passenger.

Passengers often create distractions for drivers.   They may make noise, eat food, sing along to the radio or play with the dials.   Children, especially, can create significant distractions.   However, just because someone created a distraction does not mean that person should be liable for an accident that results.   In order to trigger liability for a passenger, the passenger must be found to be negligent, and their behavior must have actually contributed to the accident.   A passenger who, for example, grabs the steering wheel, grabs a driver’s hand or arm, covers the driver’s eyes, or pushes them while driving, could certainly be held liable for causing a crash.

Provided that the driver took these actions willingly, however, it will be difficult to apportion much blame on the passenger.   Drivers retain responsibility for the safety of everyone in their car and have a duty to avoid being a danger to others on the road.   If a passenger is becoming a major distraction, the driver has the responsibility to correct the matter; the driver should try to convince the passenger to stop their disruptive behavior and, if the behavior is clearly creating a danger, the driver should probably stop the vehicle before getting into a crash.   Passenger liability is possible, but drivers are still generally responsible for what happens to people in their cars or those who are hit by their vehicles.

If you or a loved one has been injured by a negligent passenger or driver in California, talk to a knowledgeable and effective Palmdale car crash attorney about pursuing a claim for damages by calling the Kistler Law Firm at 661-206-6990.