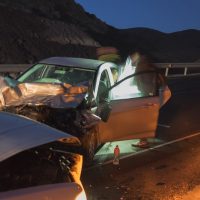 An accident in Lancaster has left three members of a family dead and others injured. Accidents caused by red light running are one of the most serious threats to roadway safety, especially in urban areas. Read on to learn more about the local accident and the dangers of running red lights, and contact an Antelope Valley personal injury attorney for more information.

The recent accident occurred at the intersection of Avenue J-8 and Challenger Way in the city of Lancaster. A silver four-door sedan heading east on Avenue J-8 crashed into a blue sedan driving north on Challenger. The blue vehicle, which was carrying a family, sustained very heavy damage in the collision. Three individuals in that vehicle were declared dead at the scene of the accident, including a couple in their 20s and their grandmother, who was visiting from Mexico. The silver sedan was carrying four young men, all of whom were taken to the hospital with non-life-threatening injuries. Law enforcement reported that all aspects of the crash were under investigation, including whether or not the driver of the at-fault vehicle was intoxicated at the time of the accident.

Red light running accidents a common cause of crashes in cities

Drivers who run red lights are putting their own lives and the lives of others on the road at serious risk. According to the Insurance Institute for Highway Safety, accidents caused by drivers running red lights or other traffic signals, such as stop signs, were the most common type of crash in urban areas. 39% of all accidents that law enforcement determined were caused by red light running resulted in injuries. In over 50% of all fatal accidents caused by red light running, the fatalities occurred among passengers in the other vehicle, pedestrians, or cyclists. Overall, crashes caused by running red lights result in over 700 fatalities each year across the US, and more than 130,000 injuries. The victims of red light runners may have a claim for injuries caused in a red light crash, such as the cost of their medical care, lost wages, or pain and suffering they endured as a result of the accident.

If you’ve been hurt in a red light crash in the Antelope Valley, get help filing a claim for money damages resulting from that crash by contacting the Palmdale car accident attorney at the Kistler Law Firm at 661-206-6990.