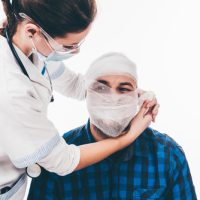 A recent study conducted by car safety researchers has found that rear-facing car seats, widely considered by experts to provide the best protection to infants, are linked to head trauma in infants during rear-end crashes.

The study in question used dummies modeled after six-month-old infants, placing them in rear-facing car seats using either the car’s seat belts, or using the lower-positioned “LATCH” anchors. These cars were then subjected to an impact from the rear. The researchers found that the seats would be thrown backward, toward the seat back the infants faced, causing the infants to strike their heads against the seat back.

While many parents dislike placing their children in rear-facing seats due to their inability to see the child while they drive, safety experts and pediatricians are in agreement that the seats are safest for small children. The American Academy of Pediatrics began recommending in 2011 that infants and toddlers age two and under be placed in rear-facing car seats. Since then, several states have enacted legislation requiring that infants under age 2 be placed in rear-facing seats, with California among them. A number of other states strongly recommend but do not require it. Infants and small toddlers in rear-facing seats have been found to be five times safer than those in front-facing seats. This is due in large part to the fact that head-on and side-impact crashes are simply more dangerous than rear-end crashes. While there is a risk of head trauma from a rear-end crash, even those injuries are less severe than those a child could receive from being in a front-end crash while in a front-facing seat. Instead of suggesting that parents place their children in a different type of seat, the researchers who conducted the study described above recommended that car seat manufacturers create a seat with a greater ability to resist pitching forward in a rear end crash, such as by using a tether that runs from the car floor to the top of the seat.

If you or your child has been injured in a car accident in the Antelope Valley, contact the experienced car accident and personal injury attorney Paul Kistler for a consultation on your claims, at 661-206-6990.