Who is Responsible if I’m Hit by a “Smart Summon” Tesla? 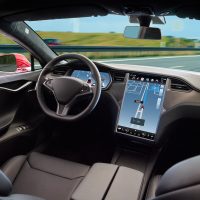 Self-driving cars are not just the future of driving; they are the very near future. Studies have suggested, and proponents strongly proclaim, that self-driving cars are safer than human drivers. At the moment, we have different variations on computer-assisted driving, such as automated parking assistance. Tesla has taken that a step further, releasing a “Smart Summon” feature for some of its cars that allows owners to stand nearby and have the vehicle unpark itself to come pick up the owner. Tesla CEO Elon Musk claims that Tesla will be releasing fully-autonomous cars by the end of next year.

But, accidents do happen. As it stands right now, how should the law handle a fender-bender with a Smart Summon Tesla? Learn more about self-driving car accidents below, and reach out to a knowledgeable Lancaster car accident and product defect lawyer with any questions or if you have been injured by an automated vehicle or negligent driver in the Antelope Valley.

Tesla recently released a feature called “Smart Summon” for some Tesla owners. The feature allows those owners to use an app to call their car, as long as it is within 200 feet and in their line of sight. Users press a button to start their car and release the button to stop it. The app is meant to be used in parking lots. While the feature is a significant new development towards self-driving cars, Smart Summon has been connected to numerous accidents.

The National Highway Traffic Safety Administration (NHTSA) announced that it is looking into reports of crashes involving Tesla’s Smart Summon in parking lots across the country. Users have posted videos of the feature malfunctioning on social media, complaining of bumper damage, cars running into garage walls, and collisions or near-collisions with other vehicles.

Tesla claims that its Smart Summon and other Autopilot features come with clear, strong warnings about use and that owners should only use the function when they have direct line-of-sight with the car. The feature is not fully autonomous and still requires user intervention. From Tesla’s perspective, that puts the blame (figuratively and legally) squarely on the owners of the cars. Tesla supporters point to the videos as evidence that owners are mainly getting into accidents when they do reckless things with the technology. Moreover, the problem is likely to be worse while there is a mix of “smart” and “dumb” cars on the road, which do not communicate with one another.

Whether car owners or Tesla would be responsible for a crash is likely a question of who was actually negligent. If the technology was working as intended and the owner was behaving recklessly (summoning the car from across a busy intersection, for example, rather than in an empty parking lot), it is reasonable to assume that a court would find the owner liable. If, however, the owner is using the feature as intended and the Tesla veers out of control or stops unexpectedly, a strong argument could be made that the accident resulted from a defective product. At that point, the ball may be in Tesla’s court. Likewise, if another driver causes an accident while the self-driving car was operating as intended, that third party would likely be responsible. It remains to be seen how these legal questions evolve as we move toward fully-autonomous vehicles.

Get Serious Legal Help after a Lancaster Traffic Accident

If you have been hurt in an Antelope Valley self-driving car accident or other car crash, contact a skilled and dedicated Lancaster personal injury attorney about pursuing a claim for damages by calling the Kistler Law Firm at 661-206-6990 for a free consultation.