Can You Sue the County After a Dog Bite in California? 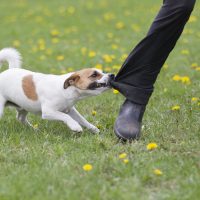 Animal owners have a responsibility to protect the public against attacks by their pets. California law holds pet owners liable for dog bites and other animal attacks, and, under certain circumstances, other property owners or even municipalities may also be vicariously liable. Los Angeles County recently entered into a settlement with the family of a 63-year-old Palmdale grandmother who was killed a pack of four vicious pit bulls. Read on for details about the attack and the subsequent lawsuit, and contact a dedicated Palmdale dog bite injury lawyer with any questions or if you have been attacked by an animal in the Antelope Valley.

An elderly Palmdale woman was walking on Avenue S near 115th Street East in Littlerock as part of her daily exercise routine when she was attacked by a pack of four angry pit bulls, which were unleashed. In the course of the attack, she suffered around 200 puncture wounds. A passerby in a pickup truck saw the attack and attempted to scare the dogs away from continuing the attack by honking her horn. The driver also called 911. The dogs proceeded to chase after the pickup truck. The woman died on the way to the hospital.

The dogs belonged to a man who lived around an eighth of a mile away. According to police reports, the dogs’ owner kept the dogs as well as a shotgun to guard a drug operation at his house. The owner knew that the dogs regularly jumped his yard fence and attacked passerby–there were at least nine other attacks identified. As a result of the attack, the owner was convicted of second-degree murder. In rejecting the appeal of his conviction, the appellate court emphasized that the owner knew his dogs’ propensity for violence and thus had a duty to exercise reasonable care to protect the public. Because he failed to do so, he caused the woman’s death.

Can you sue the county?

The family of the woman killed in the attack sued the County of Los Angeles for negligence, claiming that it failed to prevent the attack that led to the woman’s death. The plaintiffs alleged that the Department of Animal Care and Control had been receiving complaints dating back to 2005 about the vicious pack of pit bulls escaping from the man’s property and attacking people, pets, and livestock, yet the Department still chose not to impound the dogs. There were at least two separate complaints made in the four months leading up to the woman’s death.

The lawsuit contends that the county had a mandatory duty to impound stray and unlicensed dogs. Under certain circumstances, where a city or county official has a mandatory obligation under law to act, and the failure to exercise that duty leads to an injury, the city or county may be held liable for the damage. Such cases can be extremely difficult to prove.

In this instance, the county contended that they had no mandatory duty to impound dogs and thus should not be held liable. However, without admitting fault, they chose to settle for a substantial amount, citing the risks and uncertainties of litigation.

If you or a loved one has been injured by a dog or other animal in California, talk to a seasoned and dedicated Palmdale personal injury attorney about pursuing a claim for damages by calling the Kistler Law Firm at 661-206-6990.