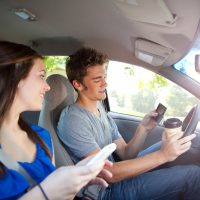 A recent survey conducted by the AAA Foundation for Traffic Safety shows a disconnect between what US drivers know to be safe driving behaviors, and how they actually drive. Careless or reckless drivers who cause injury accidents by exhibiting these sorts of dangerous behaviors on the road may be liable in a claim for personal injury damages. Read on to learn more about the current state of driver attitudes and behavior, and contact a California auto accident attorney if you’ve been hurt in a car accident.

Drivers from all ages and geographic regions surveyed

The survey looked at the driving habits of drivers aged 16 and up who had driven within the past 30 days. The drivers were asked to provide an opinion on safety laws, such as those limiting distracted driving or requiring convicted drunk drivers’ cars to have an ignition interlock device. The participants were also asked whether they had committed any of a number of unsafe driving habits themselves within the past 30 days.

Despite finding that unsafe driving practices posed a threat to their own safety and that of other drivers, many survey participants reported having recently acted in unsafe ways while driving. For example, while nearly 93% of drivers considered it unacceptable to drive through a red light when it would have been safe to stop, almost 36% of drivers had done just that in the preceding month. Additionally, while 88% of drivers disapprove of speeding through a residential zone, 46% of drivers admitted to driving at least 10 mph over the speed limit on a residential street in the past 30 days.

If you’ve been hurt in a crash in Southern California, find out if you have a claim for money damages for your injuries, and contact Antelope Valley personal injury lawyer Paul Kistler for a consultation, in Palmdale at 661-206-6990.