What is Contributory Fault? 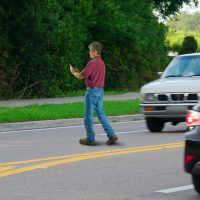 Contributory Fault Means No Recovery for a Negligent Plaintiff

Contributory fault, also called contributory negligence, is a legal scheme concerning when and whether a plaintiff can recover after a negligence-based incident, such as a car accident. In the quintessential personal injury matter, one party is entirely to blame: A drunk driver runs a stoplight and hits a pedestrian in the middle of the crosswalk. In the real world, however, not every case is so clean-cut.

Contributory fault is an outdated and unnecessarily severe rule for personal injury matters. The vast majority of states have abandoned contributory fault rules in favor of “comparative negligence.” In a state with comparative negligence, a plaintiff who was partially to blame for an accident can still recover against the at-fault defendant, but the plaintiff’s recovery may be offset by their proportion of fault.

Consider the drunk driver/pedestrian example once again. Imagine the jury finds that the drunk driver was 75% to blame for causing the accident–they were, after all, driving while intoxicated, which is extremely reckless behavior. Jaywalking against a Don’t Walk signal is also against the rules, however, so the jury decides the pedestrian is 25% responsible for the accident. Assuming the plaintiff suffered $100,000 in personal injury damages, the plaintiff could collect a maximum of $75,000 from the defendant driver–$100,000 in damages less 25%, or $25,000.

Different states employ different levels of comparative fault. In some states, a partially at-fault plaintiff can recover from the defendant so long as the plaintiff was less than 50% to blame. If the judge or jury decides the plaintiff was 51% responsible for the accident, then the plaintiff is not entitled to recover any damages.

California employs “pure” comparative fault rules. In California, a plaintiff can recover damages from a negligent defendant so long as the defendant was in any way responsible for the plaintiff’s injuries, even if the plaintiff was more than 50% to blame.

If you or someone you love has been injured or killed as a result of someone else’s negligence in Southern California, talk to a knowledgeable and successful Lancaster personal injury attorney about pursuing a claim for damages. Call the Kistler Law Firm at 661-206-6990.