When Is Your Car Considered Totaled? 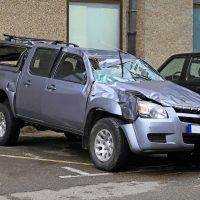 After a car crash, your car will typically need repairs. Your car insurance will cover the cost of repairs, or you can collect from another driver (and/or their insurance) if that driver was at fault for the accident. But what happens when your car is so damaged that it is basically undrivable? Are you required to wait for a complete set of repairs and then drive what is, essentially, a refurbished vehicle? When can you call the damage so severe that you should just be given a new car instead?

Read on to learn about when your car will be considered “totaled” after a California car crash, and what that means for you. If you’ve been in a car crash caused by a negligent driver in Southern California, call a seasoned Palmdale traffic accident attorney for advice and assistance.

When a Car is a “Total Loss”

In California, your car will be considered a “total loss” (totaled) when the vehicle’s actual cash value is less than or equal to the cost of repairs plus the salvage value. The vehicle’s “actual value” refers to the vehicle’s estimated value just before the crash. The vehicle’s value will be determined by several factors, including the car’s condition, mileage, damage, make, model, age, options, and more.

The salvage value refers to the vehicle’s value after the crash in its damaged state. The salvage value is calculated based on how much the insurance company believes they could get for selling the car after the wreck. Typically, if the car is totaled or near-totaled, the salvage value will be relatively low. Some parts, if not entirely damaged, might be worth salvaging and selling.

The cost of repairs refers to the cost to repair the vehicle to the point that it can run again and be operated safely by the driver.

The insurer will use the “total loss formula” (TLF) to determine whether the vehicle is a total loss. The TLF looks like this:

Why Does It Matter if the Vehicle is Totaled?

If the insurance company agrees that your car is totaled, then rather than pay for the cost of repairs, they will pay you the vehicle’s actual cash value (the car’s value before the crash). You can then use the insurance proceeds to purchase a new vehicle, rather than wait for the repairs and drive the refurbished vehicle.

Many drivers would prefer to get a new car (new, used, lease, etc.) rather than drive a vehicle that technically runs but looks and operates like a car that has been repaired from the ground up. Other drivers would prefer to have their current car fixed, rather than be forced to buy a new car. Depending on your desires and the state of your vehicle, you might need to negotiate with the insurer one way or the other.

If you or someone you care about has been injured or killed in a car crash in Southern California, talk to an accomplished and persistent Palmdale traffic accident attorney about pursuing a claim for damages. Call the Kistler Law Firm at 661-206-6990.