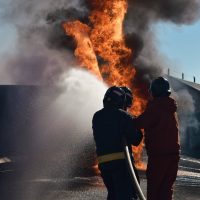 A Los Angeles suburb saw a harrowing crash right out of a movie last week. Celebrated actress and director Anne Heche, known for roles in blockbusters Six Days, Seven Nights and I Know What You Did Last Summer among many other film and television projects, was involved in a fiery crash that destroyed a local resident’s home and left the actress in a coma. Sadly, after several days, Ms. Heche was removed from life support and passed away. Continue reading for details about the accident, and call a seasoned Lancaster car accident injury lawyer for help after a Southern California car crash.

Just before 11 a.m. on Friday, August 5, police received reports of a catastrophic car accident in Mar Vista, a neighborhood in west Los Angeles. A Mini Cooper had crashed through the walls and directly into a two-story house in the 1800 block of South Walgrove Avenue. Firefighters described the scene as presenting a “well-involved fire,” with a vehicle lodged in the building. Officials stated that the crash involved “a solo vehicle that appeared to be driving at a high rate of speed on a perpendicular street and launched through the front yard, into the home.” The vehicle launched 30 feet into the home, demonstrating the high speed the car must have been traveling. The crash caused the car and the house to catch fire.

Responders found 53-year-old American actress Anne Heche trapped behind the wheel of the vehicle, surrounded by fire. Firefighters indicated that Heche was speaking and responding as they freed her from the vehicle, although her condition has since worsened. Though she was reported as stable on Friday at the time of the wreck, on Monday a spokesperson for the actress stated: “Shortly after the accident, Anne Heche became unconscious, slipping into a coma and is in critical condition. She has a significant pulmonary injury requiring mechanical ventilation and burns that require surgical intervention.” After Ms. Heche was declared brain dead, she was “peacefully taken off life support,” according to a spokesperson.

The woman living in the home that Heche crashed into was, thankfully, uninjured. Her home and possessions within have been destroyed by the crash and resulting fire, however. According to the woman’s attorney: “All of her property, including items of profound sentimental value, were destroyed.” The car stopped just two feet from where she was sitting, luckily avoiding her and her pets.

Official reports, witnesses, and videos captured by witnesses depict a harrowing scene that ultimately led to the crash. A video appears to show Heche’s Mini Cooper crashing into a garage door at an apartment building half a mile from the eventual crash site. Police stated they are investigating “misdemeanor hit and run incidents” that happened before the South Walgrove crash. Because of Heche’s condition, the police obtained a warrant to test her blood for substances on suspicion of DUI. Toxicology reports later confirmed the presence of narcotics, but as she has since passed away, the police will not act on that information.

Based on the facts presented so far, Ms. Heche’s estate will likely be liable to the woman whose home was destroyed. The prior collision suggests Heche was not in a proper condition to stay behind the wheel. In difficult times like these, people who have been harmed by another’s negligence or misconduct in a car accident are entitled to pursue a recovery for their damages, even when the negligent driver did not survive the crash.

If you or someone you care about has been injured or killed in a car crash in Southern California, talk to a seasoned and effective Lancaster traffic accident attorney about pursuing a claim for damages. Call the Kistler Law Firm at 661-206-6990.