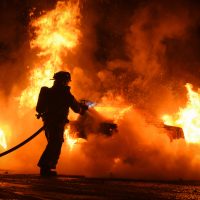 Around 2:53 p.m. on a recent Sunday afternoon, Barstow Dispatch Center received a call reporting a collision on State Route 58 westbound, east of US-395. According to the authorities, the 44-year-old driver of a white Freightliner tractor-trailer had been driving westbound on State Route 58 at about 55-60 miles per hour. The driver approached heavy traffic where there were several cars at a complete stop, but he continued driving without slowing for an undetermined reason. He collided with a white Chevrolet Silverado driven by a 54-year-old Texas man, sending the Chevrolet flying. The truck continued into the back of a black Cadillac DTS driven by a 54-year-old Bakersfield man. The Cadillac became fully engulfed in flame, later put out by fire personnel. The truck finally crashed into a white Nissan Maxima driven by a 48-year-old Lancaster man; the Nissan was propelled into the back of a fourth car, a black Hyundai Sonata driven by a 40-year-old Bakersfield man. The Nissan was crushed by the impact.

Responders found nine people who were involved in the collision, two of whom sustained critical injuries and had to be airlifted by helicopter to nearby trauma centers. The remaining seven suffered moderate to minor injuries.

Large trucks pose a danger to other motorists on California roadways. Truck drivers are often overworked, forced to endure long shifts without rest in order to make deadlines. There are rules about the maximum hours truckers can haul between rests, but many truck drivers skirt these rules either on their own initiative or due to pressure from their employers. Even with the best of drivers, accidents occur, and truck accidents are far more deadly than typical passenger car crashes. Trucks are massive, may be hauling hazardous chemicals, or may be hauling other equipment that can become dangerous flying debris in the event of an accident.

According to data from the National Highway Traffic Safety Administration (NHTSA), there were 4,455 fatal crashes nationwide involving large trucks or buses in 2017, the highest number since 2006. Only 885 of those fatalities were truck occupants; the huge majority were other drivers, passengers, or pedestrians. In California, there were 320 fatal accidents leading to the death of 361 people in 2017. Beyond fatalities, there were 119,000 injury crashes involving large trucks or buses in 2016 across the country, the highest number in at least 20 years. The rate of truck crashes in California in particular has been on the rise over the last eight years. Truckers who operate their trucks negligently, or trucking companies who skirt safety regulations and equipment, must be held accountable for any injury or deaths they cause.

If you have been hurt in an Antelope Valley truck accident, talk to a seasoned and dedicated Lancaster personal injury attorney about pursuing a claim for damages by calling the Kistler Law Firm at 661-206-6990.