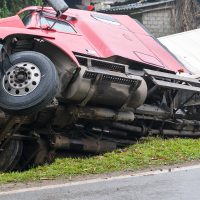 Three men were killed recently in a fiery crash involving a big rig on Pearblossom Highway in Palmdale. The highway was closed for some time following the accident as police investigated. Read on for details about the crash, and contact an experienced Palmdale personal injury lawyer if you or a loved one has been injured or killed in a truck accident in the Antelope Valley.

According to authorities, a Nissan pickup truck was traveling southbound on Pearblossom Highway at around 7 a.m. on a recent Tuesday when it suddenly veered into oncoming traffic and collided with a semi-truck that was going north. The collision happened between 60th and 70th street in Palmdale. The semi truck’s cabin burst into flames from the impact. Ultimately, the Nissan truck was demolished, and the semi-truck’s cab was a burned-out husk.

Two men who had been in the truck were pronounced dead at the scene. A third man was taken to a nearby hospital where he later died. The truck driver, also the truck’s sole occupant, was taken to a nearby hospital for treatment of minor injuries and is expected to survive. Police were investigating the cause of the accident but did not believe that drugs or alcohol were involved.

While this particular accident may have been the fault of the passenger car driver, California drivers need to remain vigilant wherever large trucks are found. They have a limited turning radius and a decreased ability to slow down. If truck drivers do not react with split-second reflexes to an oncoming car or other hazard, then a serious accident can result. Accidents involving semi-trucks are inherently more severe and more likely to be deadly given the sheer size of trucks as well as the likelihood that their cargo can become an additional road hazard.

Get Serious Legal Help after a Palmdale Traffic Accident

If you have been hurt in an Antelope Valley truck, car, or other traffic accident, contact a skilled and dedicated Palmdale personal injury attorney about pursuing a claim for damages by calling the Kistler Law Firm at 661-206-6990 for a free consultation.

Paul M. Kistler focuses his legal practice in the areas of personal injury law. Serving Lancaster, California and nearby cities in the Antelope Valley, he is a local attorney who truly knows his community and its people.