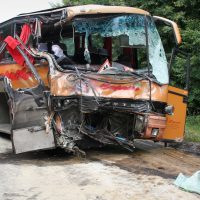 A bus headed home from a day trip to a southern California casino resulted in the deaths of 13 people on board the bus, and injuries to another 31 individuals. The collision occurred in Riverside County, in the town of Desert Hot Springs.

A group of 44 individuals, mostly seniors, were on board the bus at the time of the crash. The group had left the Los Angeles neighborhood of Koreatown earlier that day, boarding a bus owned by the USA Holiday bus company. Teodulo Vides, the bus driver and owner of USA Holiday, had long been operating the day trips headed for casinos located throughout the region. For over a dozen years, Vides had taken groups to such spots as Las Vegas, the Indian casinos east of San Diego, those in Santa Barbara, and those in the Palm Desert. On the day of the fatal crash, Vides was bringing the group home from a visit to Red Earth Casino in Salton City.

Immediately prior to the crash, the bus was approaching a road construction zone, where traffic had slowed. The bus crashed into the rear of a tractor-trailer. The bus driver was killed, along with twelve others on the bus. Thirty-one additional people were injured in the crash, including the driver of the tractor trailer. The accident resulted in the highest number of fatalities from a single crash occurring on California roads in recent decades.

According to preliminary investigations, the bus did not show signs of having applied its brakes before the collision. Typically, a failure to brake before a serious crash is caused by the at-fault driver having fallen asleep, intoxication on behalf of that driver, or a distracted driver who did not look up before a crash. Some additional theories on the cause of the crash include insufficient warning of the upcoming construction zone or the bus driver traveling at too fast a speed.

If you or someone you love has been injured in a truck, car, or bus crash in the Antelope Valley or Los Angeles region, contact the compassionate, knowledgeable, and effective Palmdale bus accident attorney Paul Kistler for a consultation, at 661-206-6990.