Decades-Long Rise in California Motorcycle Deaths May Be Slowing 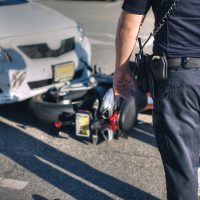 Motorcycle Crashes Have Been on the Rise for 22 Years

According to a 2018 report from the Governors Highway Safety Association (GHSA), there were 2,320 fatal motorcycle crashes across the country in 1994. This number grew steadily until it peaked in 2016 at 5,286 fatalities, a 5.1 percent increase over 2015. Five hundred sixty-six of the 2016 deaths, over 10%, occurred in California. Over 14,400 motorcyclists were injured in California as well.

The main causes of motorcycle crashes, like with other motor vehicles, are speeding, distracted driving, and impaired driving. Alcohol-impaired driving was reported as the highest contributing factor leading to motorcycle deaths, as it was for all motor vehicle types. For motorcycles, speeding was not far behind. Over a third of motorcycle crashes in 2016 involved people speeding and/or riding with a BAC over 0.08, the legal limit in most states. Motorcycles also pose additional dangers in terms of aggressive maneuvering, such as lane-splitting, and unlicensed and inexperienced riders causing dangerous situations. Nationwide, 27% of motorcyclists involved in fatal crashes were unlicensed.

GHSA suggests that the rise in crashes has to do with increased alcohol use, marijuana decriminalization, excessive speed in part due to new, faster bikes, a rise in distracted driving, and climate change causing an increase in the number of riding days. All of these factors taken together have caused motorcycle riding to become more and more dangerous over the last two decades.

There is reason to hope that the trend is shifting: The GHSA report shows a marked drop in motorcycle fatalities from 2016 to 2017, with California’s overall number dropping even more than the rest of the country. There were 406 motorcycle deaths in California in 2017, representing a 28.3% decrease from 2016. The national rate meanwhile dropped by 8.6%. The report takes pains to note, however, that the drop is in line with year-to-year variability and may not indicate an actual shift in the trend.

If you have been hurt in an Antelope Valley motorcycle accident, talk to a seasoned and dedicated personal injury attorney about pursuing a claim for damages by calling the Kistler Law Firm in Palmdale at 661-206-6990.