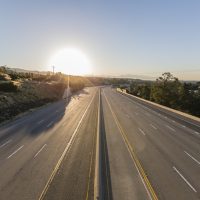 The COVID-19 coronavirus pandemic has led to nearly 100,000 deaths in the United States, infecting over a million people in the country so far, as well as wreaking havoc on the U.S. economy. There has, however, been one unexpected positive turn: Modified driving habits connected to quarantines and lock-down orders have cut down significantly on the incidence of traffic accidents, especially in California. Read on to learn about this small silver lining to the coronavirus pandemic, and reach out to a dedicated Palmdale car crash attorney if you or someone you care about has been hurt in a car accident in the Antelope Valley.

California has the highest number of registered vehicles on the road of any state in the country. Consequently, California has one of the highest numbers of fatal car crashes annually, with over 3,200 deadly crashes and over 3,500 fatal crash victims every year. The total number of Californians killed in car crashes in 2018 (3,563) was exceeded only by Texas (3,642). Lest you think it is entirely due to California’s high population, California also has one of the highest rates of traffic fatalities as measured against total population.

Since the shelter-in-place order issued by Governor Newsom went into effect on March 20, however, the number of traffic accidents–and the number of crash-related injuries and traffic deaths–has been cut fully in half, according to a report issued by the Road Ecology Center at the University of California, Davis. The report doesn’t just look at crashes before and after the shelter-in-place order was issued. Instead, the report compares the number of crashes, injuries, and fatalities between February 27 and April 11, 2020–the days leading up to and immediately following the order–and the same time period in 2019.

According to the report, there was a 50 percent reduction in traffic collisions and related injuries, corresponding to a 55 percent reduction in traffic on some major highways. The report shows roughly 15,000 fewer crashes per month than usual for this period, as well as 6,000 fewer injuries and fatal accidents. The sudden drop in traffic crashes was briefly interrupted when record-breaking rains hit Southern California in early April, returning California to a “normal” incidence of accidents and injuries for the time period. Still, the trend appeared to continue after the rains lapsed. Whether the trend continues for the remainder of the lock-down or will have a lasting effect on California traffic safety remains to be seen.

If you or a loved one has been injured by a negligent driver in California, talk to a dedicated and effective Palmdale car crash attorney about pursuing a claim for damages by calling the Kistler Law Firm at 661-206-6990.