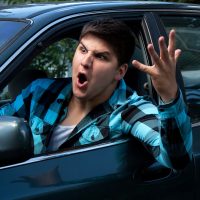 A crash on the 14 Freeway in Santa Clarita resulted in damage to two vehicles and injuries to a driver who was not involved in the crash. The incident is an example of the startling number of road rage-motivated car accidents that occur each year on roads both in California and nationwide.

The recent crash occurred in the early stages of rush hour on Wednesday, June 21st. Two men were riding together in the HOV lanes of the 14 near Newhall Avenue in Santa Clarita. The passenger noticed an altercation between the driver of a motorcycle and a sedan, vehicles which had recently passed them while traveling at a high rate of speed. The observer took out his cell phone and began to film the interaction.

The footage depicts the motorcycle and sedan veering toward one another, followed by the motorcyclist attempting to kick the sedan. The sedan swerved toward the motorcyclist again, sideswiping the bike. At this point, the sedan appeared to lose control, swerving to the right, then violently swerving to the left into the center median. The sedan ricocheted off the median into the neighboring lane of traffic, causing a pickup truck to overturn. The driver of the truck was sent to the hospital with moderate injuries. The motorcyclist did not stop, and police are still on the lookout for the driver.

Road rage-fueled crashes may be more common than you realize. According to a survey conducted by AAA, 78% of all drivers surveyed admitted that they had committed at least one aggressive driving behavior in the previous year. About half admitted to deliberately tailing another car, 45% to honking at a driver out of anger or frustration, and 12% admitted to deliberately cutting off another driver. Troublingly, nearly 3% of all drivers stated that they had hit another car on purpose, and nearly 4% had left their car to confront another driver. Since most drivers are loath to admit that they retaliated against another driver out of anger, these numbers are believed to be an underestimation of the actual rate of road rage-motivated crashes. Deliberately causing an accident can result in even greater liability for drivers, including possible criminal charges for assault.

If you or someone you love has been injured in a crash in Southern California, contact the skilled and dedicated Palmdale accident defense lawyer Paul Kistler for a consultation, at 661-206-6990.