What are the Dangers of Drowsy Driving? 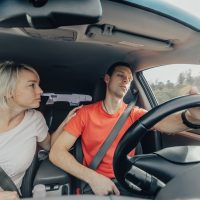 Drowsy Driving is Just as Dangerous as Drunk Driving

Falling asleep at the wheel is obviously incredibly dangerous. The car is likely to drift off the road into a parked car, wall, or tree, drift into other vehicles heading the same direction, or drift into oncoming traffic. Any of those actions can result in a serious accident with deadly consequences. However, falling asleep at the wheel is not the only risk created by drowsy driving. Failing to get the proper amount of sleep causes cognitive impairment to drivers, increasing the likelihood of a crash even without falling fully asleep.

Lack of sleep affects drivers in many ways, including the following:

According to the National Highway Traffic Safety Administration (NHTSA), the effects of drowsy driving on cognitive functioning mimic those of driving while intoxicated. In fact, going without sleep for 18 hours is comparable to having a blood alcohol content (BAC) of 0.05%. After 20 hours without sleep, drowsy drivers are comparable to drivers with a BAC of 0.08%, the legal limit for driving in most jurisdictions. After 24 hours without sleep, impairment is equivalent to a BAC of 0.10%, well above the legal limit.

Despite the dangers of drowsy driving, it is incredibly common. Drivers get on the road without sufficient sleep every day, disregarding the consequences. According to the U.S. Centers for Disease Control and Prevention (CDC), roughly 1 in 25 (around 4%) of adult drivers report having fully fallen asleep at the wheel in the previous 30 days. People who sleep less than six hours a night are significantly more likely to fall asleep.

That alarming figure represents just the folks who have fully fallen asleep in the month leading up to the survey, and who were willing to admit it. The actual number of dangerously drowsy drivers on the road at any given time is much higher. Make sure you are vigilant whenever you are on the road, especially late at night or early in the morning. If you are feeling drowsy, take measures to prevent yourself from falling asleep at the wheel.

If you or someone you care about has been hurt by a drowsy or otherwise negligent driver in California, talk to a zealous and qualified Lancaster car crash attorney about pursuing a claim for damages by calling the Kistler Law Firm at 661-206-6990.