What You Should Know About Dog Attacks in California 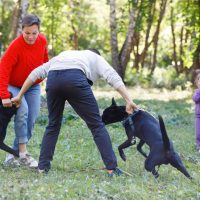 California sees more dog bite injury lawsuits than any other state in the country. While we certainly love our pets, it is important to keep other members of the public safe from our pets’ worst impulses. When a dog attacks another person, the dog’s owner may be liable for any damages caused. The rules for dog bite and animal attack claims vary significantly by state. Continue reading to learn about the dog attack laws in California, and call an experienced Palmdale dog bite and animal attack lawyer if you or a loved one has been hurt by an animal attack in the Antelope Valley.

California has a law that imposes strict liability on dog owners for dog bites. “Strict liability” means that the injured victim does not need to show that the owner was negligent in any way. Instead, the victim need only show two things:

If both factors apply, the victim can sue the dog’s owner for damages caused by the bite. Unlike under dog bite laws in other states, a California plaintiff need not prove that the dog was known to be “dangerous” because it had previously bitten someone.

Animal Attacks Outside of Strict Liability

California’s strict liability rules only apply when the dog “bit” a person. The rule does not apply if damages were caused by other animal behavior, such as if the dog tackled someone to the ground and they were injured as a result. As mentioned, there are several additional exceptions to the rule as well. If a person is injured by a pet dog but the strict liability dog bite rules do not apply, the victim can still file a claim against the owner based on negligence.

If the dog has previously bitten a person, then the owner knows that their dog is potentially “dangerous.” California law imposes an additional duty of care on the owner of a dog known to be dangerous. For example, they might have to keep their animal on a restrictive leash at all times, including when the animal is in the yard at home.

If you or someone you care about has been hurt by a vicious dog in California, talk to a passionate and effective Palmdale dog bite injury attorney about pursuing a claim for damages by calling the Kistler Law Firm at 661-206-6990.