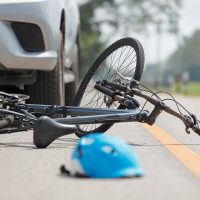 Driving while texting or emailing poses a serious threat to everyone on the road. The dangers of distracted driving are illustrated by a recent case involving a cyclist hit by an LA County Sheriff’s deputy patrol car. With distracted driving on the rise, be aware of how dangerous and lethal it is to others. Read on to learn about the case, and contact an experienced southern California personal injury attorney with any questions about an accident.

An on-duty LA deputy was driving his patrol car around 1 p.m. on a sunny day on Mulholland Highway in Calabasas, going about 48 miles per hour, when he struck a cyclist from behind. The cyclist slammed into the car’s windshield. He was pronounced dead at the scene. The officer claimed the cyclist had swerved into his lane, but investigators found the officer had crossed into the bike lane.

The officer had received a message from a colleague and was typing a response on his patrol computer, which investigators say caused him to stop paying attention to the road and enter the bike lane. The family of the cyclist claimed that the officer was also texting his wife at the time of the crash, but the officer argued that he had done so earlier while stopped at a red light.

The cyclists’ family sues for wrongful death, gets $12 million settlement

Prosecutors declined to bring a criminal manslaughter case against the officer, as police officers are exempt from the California law that bans drivers from using wireless electronic devices while on the job. The family of the cyclist sued the county, the sheriff’s department, and the deputy in civil court for wrongful death, claiming the deputy was driving negligently. Four years after the accident, the county settled the case and agreed to pay the family of the cyclist $11.75 million.

The crash is in line with the rise in distracted driving

A recent report by AAA found that drivers consider distracted driving the most dangerous threat on the road: 97% of respondents said that texting or emailing while driving is at least a “somewhat serious threat,” a higher percentage than even drunk or drugged driving. The study found, however, that despite drivers’ concerns, distracted driving is on the rise: 45% admitted to messaging on their phones while driving. The report found that texting or other “visual-manual” activities doubled the risk of a driver crashing.

If you or a loved one have been injured in a car accident in southern California, get help in pursuing a claim for damages against the driver by contacting the passionate, knowledgeable, and effective Antelope Valley personal injury attorney Paul Kistler for a free consultation in Palmdale at 661-206-6990.