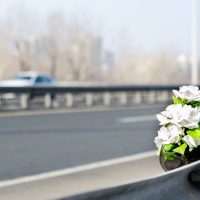 Two passengers were killed on a recent Sunday when a pickup truck lost control passing another vehicle on Highway 138. As this accident indicates, although the number of traffic crashes around the Los Angeles area dropped precipitously for much of 2020 as a result of the coronavirus pandemic, those figures appear to be climbing back to normal levels. Continue reading for details about the accident, and call a dedicated Palmdale car accident lawyer if you or a loved one has been hurt in a traffic accident in the Antelope Valley.

Around 3:00 p.m. on a recent Sunday, a 31-year-old woman from Mojave was driving a 2000 GMC Sierra pickup eastbound on Highway 138. She attempted to pass a vehicle heading in the same direction by moving into the westbound lane. The driver was then confronted with a vehicle approaching head-on in the westbound lane and veered off to avoid a head-on collision. The action caused her to lose control of the vehicle. The truck overturned and crashed on SR-138, west of 130th Street West, according to the California Highway Patrol’s report.

The truck was carrying at least three passengers in addition to the driver. Two of the passengers, a 28-year-old Lancaster man and a 46-year-old woman from Pacoima, sustained fatal injuries during the overturn sequence. A third passenger, a 19-year-old man from Lancaster, was taken to nearby Antelope Valley Hospital for treatment of minor injuries. The driver was also taken to the hospital for treatment of major injuries.

The exact cause of the crash remains unclear. The CHP report noted that the “involvement of alcohol and/or drugs is not suspected to be a factor in this collision.”

The Antelope Valley crash is one of many traffic fatalities that has occurred during the coronavirus pandemic, despite the seemingly emptier roads resulting from stay-at-home orders and business closures. According to the National Highway Traffic Safety Administration (NHTSA), while there have been fewer cars on the road as a result of the pandemic, and perhaps even fewer traffic accidents overall, there has been a roughly equal number of traffic fatalities. These statistics concern the first half of 2020, and it will be some time until we get a full picture of the entirety of 2020, but the numbers don’t look good.

Anecdotes and data alike suggest that drivers have been more reckless and aggressive on the road during the pandemic. The increase in dangerous driving has offset the safety offered by fewer cars on the road. Stated differently, in 2020 it appears that roads across the United States were significantly more fatal per mile traveled as compared to recent years. Whether this dangerous trend will continue into 2021 remains to be seen.

If you or someone you care about has been injured or killed by a negligent driver in California, talk to a seasoned and effective Palmdale car accident lawyer about pursuing a claim for damages by calling the Kistler Law Firm at 661-206-6990.