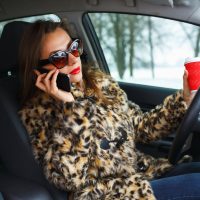 Laws barring texting while driving exist in the vast majority of states across the country, and states such as California have even more restrictive laws barring the use of cell phones while driving. Despite this fact, the number of collisions caused by distractions on the road continues to rise. In order to combat this growing crisis, federal regulators have created voluntary guidelines for use by mobile phone manufacturers, aimed at reducing the availability of distracting phone features while on the road.

According to the National Highway Traffic Safety Administration (NHTSA), 2015 was the first year in 50 years when more people died on the road than in the year before. In fact, the fatality rate went up by over 7% nationwide. One of the sources of this rise in fatalities was the number of fatal accidents linked to distracted driving. According to official numbers, over 9% of all fatal accidents involved at least one distracted driver. This phenomenon can be difficult to measure, since drivers are reluctant to admit that they were not paying attention to the road when a crash occurred, and some safety groups estimate that the true share of accidents caused by distractions is in the neighborhood of 25%.

In an effort to address this issue, the NHTSA has created voluntary guidelines on how mobile phone makers can reduce the potential for cell phones to pose a distraction to drivers. The NHTSA recommends that phones be capable of connecting to a car’s built-in entertainment system whenever possible, which would enable control of a phone without having to interact with it. When this is not a possibility, the recommendations suggest creating a “driver mode” for phones that would disable applications like Snapchat, Facebook, and Twitter when a car is shifted into drive, and would also prevent the manual input of text if a car is in motion. Driver mode would also disable video playback. While phone manufacturers have spoken out against the guidelines as too restrictive, safety groups such as the Consumers Union (the policy branch of Consumer Reports) have hailed them as a necessary measure to stem the “epidemic” of distraction-related roadway deaths.

If you or someone you love has been injured in a crash in the Antelope Valley, contact the seasoned and professional Palmdale auto accident attorney Paul Kistler to find out if you may have a claim for damages at 661-206-6990.