Is It Illegal to Drive Barefoot in CA? 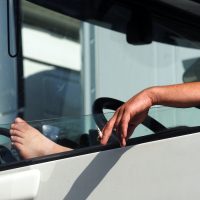 California law prohibits a wide range of conduct while driving. Under California law, you cannot consume alcohol while driving, or drive while under the influence of alcohol or drugs. You cannot text or otherwise use your phone manually while driving. Other behavior, however, is not strictly forbidden, but it may be unwise. There’s no law that specifically says you cannot change your shirt while driving, but doing so could lead to an accident and serve as strong evidence for demonstrating fault and negligence. Where does driving barefoot fall? In California, many beachgoing motorists may prefer to drive barefoot, but is doing so illegal? Read on to learn about California law concerning shoes and driving, and call an experienced Palmdale car accident injury lawyer after a Southern California car crash.

California law does not specifically cover preferred footwear. Drivers are free to get behind the wheel while wearing sandals, flip-flops, Crocs, high heels, or no shoes at all. If you are “caught” driving barefoot by the police, you will not be issued a traffic citation. Just because driving while barefoot is legal, however, does not mean it’s a good idea.

Footwear Can Affect Determinations of Fault After an Accident

While California law does not prohibit driving while barefoot, a driver’s choice of footwear can potentially affect their liability. Many traffic safety experts believe that wearing flip-flops or other slip-on shoes can reduce a driver’s control, especially if they are wet. Backless footwear can slide off while driving, robbing a driver of control over acceleration or deceleration for precious seconds while also causing driver distraction. Flip-flops and other shoes can also get caught underneath a pedal. A British study, for example, found that flip-flops contributed to as many as 1.4 million car crashes annually.

Other shoes may be less than ideal as well: High heels can restrict motion of the foot, sapping some control from the driver, and slick soles can slide right off the pedal.

Similarly, some experts believe driving while barefoot can reduce a driver’s control, especially if their feet are wet. Drivers without shoes might also need to put more force on the pedals to accelerate or decelerate, which can affect reaction time. On the other hand, driving while barefoot may be preferable to wearing flip-flops or other problematic shoes that could slip off or get caught under the pedals.

If a driver fails to wear secure, dry footwear and they wind up in a car crash, their footwear might become evidence in an eventual injury claim or lawsuit. Driving barefoot or with insecure footwear could be used to show a driver shares in fault for causing an accident. Driving without shoes can thus lead to liability for others’ injuries or reduce the recovery for one’s injuries by way of comparative negligence.

Driving barefoot may not be illegal, but it may not be the best decision. Before you get behind the wheel, choose your footwear carefully, and understand the risks.

If you or someone you care about has been injured or killed in a car accident in Southern California, talk to a dedicated and accomplished Palmdale traffic accident attorney about pursuing a claim for damages. Call the Kistler Law Firm at 661-206-6990.