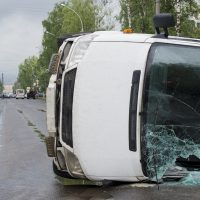 A passenger van was involved in a serious wreck in Lancaster on a recent Saturday, leaving fourteen people injured. Two of the participants suffered serious injury. Continue reading for available details about the Lancaster van crash, and contact a dedicated Lancaster auto accident attorney with any questions about possible personal injury claims in the Antelope Valley.

According to reports, passengers chartered a travel van in Culver City for a trip to Lancaster to enjoy the poppy fields. The van was traveling westbound along West Avenue F when it collided with a Mini Cooper heading north on North 60th Street West. The impact of the collision caused the van to roll over, possibly twice, before it smashed into a light pole and came to a stop.

Twelve victims were sent to nearby hospitals for treatment. Ten were taken to an area hospital by ground. Two victims in critical condition had to be extricated from the wreckage and were then airlifted to nearby hospitals in critical condition. Two other injured victims refused to be transported for treatment. Officials said that the passengers in the van were likely saved by wearing seatbelts: As the van rolled, they mainly stayed in their seats.

Officials were still determining the cause of the crash, but they do not believe drugs or alcohol played a role. The driver of the van stated that she was unfamiliar with the area, which may have contributed to the accident.

The National Highway Transportation Safety Administration (NHTSA) has issued specific safety protocols for 15-person passenger vans, which they describe as “cumbersome.” NHTSA advises passengers wear seatbelts while riding and that drivers be trained and experienced. Inexperienced van drivers pose a risk to others on the road as well as the passengers in the van. NHTSA notes that 509 van occupants were killed in accidents from 2007 through 2016, and that 41% of those killed were ejected from the van.

Get Serious Legal Help after a Lancaster Auto Accident

If you have been hurt in an Antelope Valley car accident, talk to a skilled and passionate Lancaster personal injury attorney about pursuing a claim for damages by calling the Kistler Law Firm at 661-206-6990.