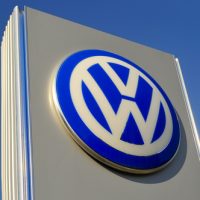 In a scandal that affects over 480,000 vehicle owners in the US, news broke in September that German auto manufacturer Volkswagen had installed devices on some of its vehicles that helped the cars to evade pollution tests. The US Environmental Protection Agency (EPA) broke the news after it deduced through investigations that Volkswagen’s so-called “clean diesel” vehicles were equipped with software that would limit the amount of nitrogen oxide emitted by the car during smog checks, but that, when the car is driving normally, the amount of nitrogen oxide being emitted by the car exceeds federal limits by up to 40 times. The “defeat devices” are installed in diesel models of Volkswagen Jettas, Beetles, Golfs, and Passats with model years between 2009 and 2015. Volkswagen states that it has set aside $7.3 billion to repair the vehicles and compensate owners for the fraud, and estimates that it will take between one and two years to complete repairs of the cars to remove the defeat devices. Many experts speculate that removing the devices will substantially reduce the quality of the vehicles’ performance and will drastically lower their resale value.

Now, many states are launching investigations and lawsuits against the car manufacturer, in addition to over 200 individual or class action lawsuits filed by deceived Volkswagen owners. One class action lawsuit has already been filed on behalf of owners of the almost-70,000 affected vehicles in California. The class action lawsuit claims that, based on a failure by the company to comply with a California law requiring that car manufacturers guarantee that emissions control parts remain functional for seven years or 70,000 miles, Volkswagen must either replace the vehicles or make restitution to the cars’ owners. The lawsuit claims that, since the cars are in violation of emissions laws, they cannot be driven legally; while the EPA has granted a temporary reprieve from the application of emissions laws on the defeat device-equipped cars, states’ emissions boards will eventually require that the cars comply. Legal experts have suggested that owners may receive the difference between what the car was worth before and after the defeat device was uncovered, or simply require that Volkswagen buy the cars back, since no amount of money could give the buyers the vehicle they originally thought they were purchasing.

If you have been defrauded or otherwise been injured by a defective product, contact the Palmdale products liability attorney at Kistler Law Firm, APC for a consultation, at 661-206-6990.