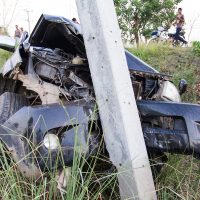 Street racing is more common in Southern California than most people realize. And unlike the glamorous portrayal in Hollywood, the consequences of street racing are deadly, and they often injure or kill people who never chose to be a part of the deadly sport. A recent crash took the life of a young man in Palmdale in what police suspect was a street racing incident, adding him to a group of nearly 200 people who have been killed in street racing crashes in recent years in just the Los Angeles area. Read on for details about the fatal street crash and California’s street racing problem, and contact a seasoned Palmdale auto accident attorney with any questions about possible personal injury claims in the Antelope Valley.

At around 11 p.m. on a recent Thursday, police responded to reports of a crash at the intersection of Rayburn Road and Tierra Subida Avenue in Palmdale. The police found a 2004 Honda Civic had collided with a light pole. According to witnesses, a champagne-colored Mercedes was headed northbound on Tierra Subida at a high rate of speed and made a sharp right turn onto Rayburn Road. Seconds later, the driver of the Honda tried to make the same sharp turn but failed and crashed into the light pole.

The Honda driver, a young 26-year-old man from Palmdale, was taken to a nearby hospital in serious condition. He was pronounced dead around 30 minutes later, having succumbed to injuries sustained in the accident.

According to the LA Times, over the past 17 years, 179 people have been killed in street racing accidents in the LA area. Many of the victims are passengers or other drivers. Last year in Palmdale, for example, a father and his 17-year-old daughter were killed when their 2014 Chevy Camaro hit a traffic signal and split the car in two; witnesses claim that the car was involved in a street race at the time. In May of last year, a Honda Accord racing in the wrong lane of a two-lane country road near Moreno Valley hit an oncoming vehicle at the top of a hill, killing two boys aged six and eight.

Street racing in LA might be an organized event with spectators or just two drivers who know each other blazing down a public street for their own entertainment. Police have noted that, in recent years, car clubs from nearby areas including Orange County and the Inland Empire have been traveling to LA to compete against local racing crews, exacerbating the danger to locals. Whether a planned event or just two people goofing off, the danger to everyone on the road is severe. Passengers, other drivers, or pedestrians who suffer because of these reckless racers can and should hold them accountable for the damages and disaster they cause.

Get Serious Legal Help after a Palmdale Auto Accident

If you have been hurt in an Antelope Valley street racing crash or other car accident, contact a skilled and passionate Lancaster personal injury attorney about pursuing a claim for damages by calling the Kistler Law Firm at 661-206-6990.