Who Are the Plaintiffs and Defendants in a PI Case? 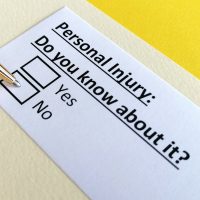 If you’ve heard about any lawsuit in the news or online, you’ve likely come across the terms “plaintiff” and “defendant.” You may have seen something along the lines of: “The plaintiff alleged that the defendant did X” or “the plaintiffs claim the defendants violated their rights.” Legal jargon can muddy the waters, making situations much more complicated and confusing than necessary, especially when your rights are involved.

If you’ve been hit by a distracted driver, if you’ve slipped on an unmarked wet floor at a grocery store, or if your child was hurt when one of their toys unexpectedly broke when it shouldn’t have, you have rights. If you wanted to bring a personal injury claim, who are the plaintiffs and who are the defendants? Below, we discuss the basics of plaintiffs and defendants in personal injury (PI) matters. If you’ve been hurt due to someone else’s negligence in Southern California, call a knowledgeable Lancaster personal injury attorney for advice and assistance.

The Plaintiffs: The Injured Party or Parties

If you were bit by a vicious dog or hit by a drunk driver and you filed a lawsuit to recover compensation, you would be the plaintiff. The plaintiff is the party who was allegedly harmed by the actions of another party (person or entity) and files a legal claim for damages. The identity of the plaintiff is established when the plaintiff files a complaint in court, kick-starting the judicial process. Until a complaint is actually filed, there are no plaintiffs or defendants, there are just people with legal rights and potential legal claims.

A plaintiff can be a single person, such as a pedestrian struck by a negligent driver. A plaintiff can be an entity, such as a company suing another company for breach of contract. There can be multiple plaintiffs, such as if the occupants of a building collectively sue their landlord based on problems with the building. A class action is a special type of case in which a large group of people suffered essentially the same injury caused by the same defendant, and it would be easier for all claims to be wrapped into a single case. For example, personal care products manufacturer Johnson & Johnson was hit with a class action brought on behalf of everyone who was hurt by their baby powder products, which were discovered to contain asbestos. In a class action, there are one or a few “named” plaintiffs who bring the lawsuit on behalf of a “class” of plaintiffs who suffered the same or similar injuries as the named plaintiffs.

Sometimes, the plaintiff can be a party suing on behalf of someone else who lacks the legal capacity to sue on their own. For example, minor children have limited rights to sue in court; if your child was hurt in an accident, you might sue on your child’s behalf.

The Defendants: The Parties Who Are Legally Responsible for the Plaintiffs’ Injuries

The defendants, on the other hand, are the party or parties that the plaintiffs allege should be held legally responsible for the plaintiffs’ injuries. The identity of the defendants varies depending upon the nature of the claim, the circumstances of the incident giving rise to the injury, and the relationship between potential parties to the case.

For example, if you were a pedestrian and you were struck by a drunk driver, the driver would certainly be named as a defendant in your personal injury case. The driver was the principal party who caused your injuries in the accident. There are a number of other parties who might also be involved, however, either because they contributed to the likelihood of the accident occurring (and thus share fault) or because they have a legal relationship with either the driver or the plaintiff (you).

If the drunk driver was a long-haul trucker in the midst of a job at the time of the accident, and they work for a trucking company, their employer might also be named as a defendant. Employers are responsible for the actions of their employees taken in the course of their employment, through a doctrine known as “vicarious liability” or “respondeat superior.” The same rule would apply if you were hit by a rideshare driver in the middle of a fare. You might want to name the driver’s insurance provider as a defendant if they would be the party actually responsible for paying for your damages and they are disputing your claim.

Other parties might also be named as a defendant if their actions may have contributed to the crash. If the truck driver lost control of their vehicle because the brake lines or steering were faulty, the truck manufacturer could be partially to blame for the accident; they should be named as a defendant. Depending on the circumstances, you might even have a claim against the bar that served the driver alcohol, if the bartender knew the driver was already intoxicated and planned to get behind the wheel but chose to overserve them additional drinks.

If you or someone you care about has been injured or killed through someone else’s negligence in Southern California, talk to a diligent and successful personal injury attorney about pursuing a claim for damages. Call the Kistler Law Firm at 661-206-6990 for a free consultation.