Who is Liable After a Rear-End Collision? 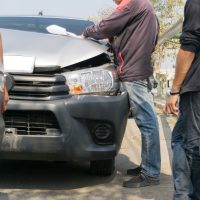 Rear-end collisions are extremely common. A driver may make a sudden stop to avoid hitting a hazard, or a driver in the rear will be distracted and fail to notice that the car in front of them reached a stoplight or stop sign. Rear-end crashes happen on freeways, on surface streets, as well as in parking garages and parking lots. Is one party always entirely to blame for a rear-end crash? Continue reading for a discussion of rear-end collisions, and contact a dedicated Palmdale car accident lawyer if you or a loved one has been injured by a drunk driver in the Antelope Valley.

The driver in back is usually liable

Common knowledge, in this instance, is generally correct: If a driver rear-ends another car, the driver in back is almost certainly responsible. Drivers are required to maintain vigilance while on the road and to keep enough distance from the next vehicle in front of them to be able to make a sudden stop where necessary. If the rear driver hits the car in front, regardless of what caused the vehicle in front to stop, an injured occupant of the first car can always claim that the driver in back would have been able to stop, swerve, or otherwise avoid a collision had they been driving as safely as they should.

Even though the driver in the back is probably liable, they may not be the only responsible party. If the driver in front was forced to stop because of someone else’s negligence, then that third party may share liability. If a person ran into the middle of heavy traffic, for example, and that forced the car in front to stop, then the pedestrian may share some of the liability. An injured party in the front car could sue the rear driver and the pedestrian together, or the driver of the car in the rear could seek to join the pedestrian in an eventual lawsuit.

Even in rear-end collisions, liability may not be entirely clear-cut. California follows a comparative fault legal scheme concerning personal injury claims, meaning that an injured party may have their total damages reduced by their percentage of fault in an accident.

If, for example, a driver was intoxicated, or they were distracted because they were texting, and they were forced to make a sudden stop because of those factors, then that driver’s negligence may have contributed to the accident. The car in the rear is still somewhat at fault–all drivers must give cars in front enough space so that they can react to a sudden stop–but the driver of the vehicle in front shares some fault. The damages claim from the driver in front may be reduced by 10 percent, 20 percent, or more, depending on how much the fact-finder believes that their negligence contributed to the crash.

If you or a loved one has been injured by in a rear-end crash in California, talk to a knowledgeable and effective Palmdale car accident attorney about pursuing a claim for damages by calling the Kistler Law Firm at 661-206-6990.