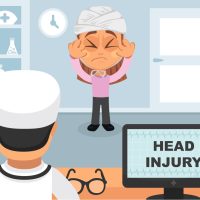 A recent study has shown that women who experience head trauma stand a greater risk of developing a concussion based on that trauma. Read on to learn more about this research and the implications it could have for a claim for money damages in an Antelope Valley car accident, and contact a seasoned California car accident lawyer for more information.

Historically, most research on traumatic brain injuries has been done on men, since men have been the gender more likely to engage in activities that result in these types of injuries. As more and more women play college and professional sports, the body of research on women and traumatic brain injuries has grown. In recent years, neurologists and sports medicine specialists had begun to notice that women suffer brain injuries at higher rates than their male counterparts, and that their concussions tended to be more severe and last longer. Studies have also found that women are likelier to incur a concussion (the mildest form of traumatic brain injury) with a smaller application of force than that required to cause a concussion in a man. However, researchers had yet to discover if there was a physiological reason that women experienced concussions at higher rates than men.

What causes concussions in the brain

The brain is composed of neurons, which connect to and communicate with one another through long cell branches called axons. These cells communicate through chemicals passed along the axons through microscopic tubes known as microtubules. Concussions result when the victim’s head suffers direct force, such as being hit with an object or colliding with a steering wheel, or indirect force, such as someone or something colliding with the body at high speed. The force causes the neuronal axons to stretch and causes rigid microtubules to break. When this happens, the chemicals being passed through those microtubules spill out into the brain. These chemicals are what cause the symptoms of concussions, such as dizziness and unconsciousness, and can also damage surrounding cells, causing longer-lasting effects from concussions.

A recent study conducted by the Penn Center for Brain Injury and Repair approached the question of why men and women experience concussions at different rates by looking at the cellular structure of women’s brains as compared to men’s brains. The study found that the microtubules in women’s brains were smaller and more prone to breaking. This theory would explain not only why women are more likely to suffer concussions, but why whose concussions tend to be more severe and longer lasting. In a trial for personal injury damages arising from a head injury, this study could provide useful support and justification should a woman victim require a greater amount in damages than a man would typically require. Women are likelier to face longer-term symptoms of head injuries, requiring them to incur greater treatment expenses, all resulting in their entitlement to a greater award in damages.

If you’ve been hurt in an Antelope Valley car or truck accident and need help getting compensation for your injuries, contact the dedicated and knowledgeable Palmdale personal injury lawyer Paul Kistler for a consultation at 661-206-6990.