What Are the Safest Forms of Transportation? 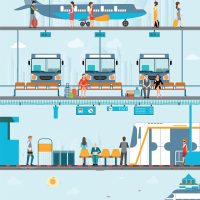 Every day, we commute to work, to the store, to visit family and friends, and for any number of other reasons. We walk, take the bus, hop on a train, fly, or drive our cars. We need to get around. Some forms of transportation are, however, more inherently dangerous than others. Despite advancements in safety technology, accidental deaths are still very common. Continue reading for a discussion of the safest and least safe forms of transportation available, and reach out to a seasoned Lancaster car accident lawyer if you or a loved one has been hurt by a negligent driver in the Antelope Valley.

Means of Transportation, From Safest to Most Dangerous

Airplane. Many people are afraid of flying. It’s scary to feel so out of control and to know that a plane crash is likely to spell certain death. The data, however, tell a different story. Airplanes are actually the safest form of commuter travel. Commercial airline accidents are extremely rare. There are very few airplane crashes generally, and nearly all of them involve small air taxis or privately-owned recreational planes. Of the 646 airplane deaths recorded in the country between 2000 and 2009, for example, 549 involved private plane crew and passengers.

Bus. Buses are also surprisingly safe, even more so than trains. Although buses are large, unwieldy vehicles that seem poised to topple at any moment, bus passengers are actually very secure. Accounting for all types of buses (school buses, charter coach buses, city buses, etc.), buses account for only ten percent of yearly traffic fatalities. Bus travel is, according to the data, a shocking 50 times safer than private car travel.

Train. When a train crashes, it’s likely to make big news, giving the impression that train crashes are common. In reality, however, traveling by train is also quite safe. Train crashes and derailments are very rare. Moreover, most train fatalities involve trespassers or unexpected vehicles on the train tracks. Commercial train passengers, on the other hand, are at very low risk of death.

Boat. Commercial and recreational boating has become much safer over the last few decades. Boats are accountable for more deaths per mile traveled than buses or airplanes, but they are still relatively safe, especially for commuters. Nationwide, there were 5,265 boating accidents in 2020, resulting in 767 deaths. In California, there were 493 boating accidents and 39 people killed. The majority of boating accidents involve recreational boats, however; ferries, passenger boats, and cruise liners are much less likely to be involved in an accident or fatality.

Car. Coming in second only to motorcycles, cars pose the real danger that we wrongly attribute to planes or buses. There are, on average, six million car accidents per year across the country. Car accidents are among the most dangerous events both in terms of the absolute number of car crashes and traffic fatalities every year, and as measured by comparing the number of deaths to the amount of travel performed. According to a study from Northwestern University, from 2000 to 2009, there were 7.28 car accident fatalities per billion miles traveled. There were only 0.11 deaths per billion miles traveled by bus and 0.07 deaths per billion miles traveled by plane during the same period. Per data from the U.S. Department of Transportation, unintentional injury (i.e., accidents) is the leading cause of death for Americans aged one to 44. Motor vehicle accidents, in turn, are the leading category of unintentional injury death, representing nearly a quarter of all unintentional injury fatalities.

Motorcycle. Perhaps unsurprisingly, motorcycles are the most dangerous mode of transportation available to the average person. In 2019, 5,014 motorcyclists were killed. Of those nationwide deaths, 474 (9.5%) happened in California. Motorcycle accidents are very common, and when motorcycle accidents do happen, they are much more dangerous. Whereas around 20 percent of passenger car accidents result in injury or death, upwards of 80 percent of motorcycle accidents end in injury or a fatality. There is just no such thing as a minor motorcycle crash unless the rider simply falls over in place. Motorcyclists are 29 times more likely to suffer fatal injuries than passenger car drivers. By one measure, a motorcyclist who travels 15 miles every day for a year has a 1 in 860 chance of dying.

If you or a loved one has been injured or killed in a traffic accident in Southern California, talk to a dedicated and thorough Lancaster car crash attorney about pursuing a claim for damages by calling the Kistler Law Firm at 661-206-6990.