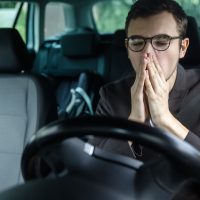 Driving while seriously fatigued or even nodding off sounds much more innocent and less harmful than driving while under the influence of drugs or alcohol, or even than driving while distracted by texts or emails. However, a new study has shown that drowsy driving is far more dangerous than existing statistics have shown. Learn more below, and contact a knowledgeable Palmdale car accident attorney for more information.

Study watches drivers to look for signs of drowsiness

The recent research was published by the AAA Foundation for Traffic Safety. The researchers used video footage collected during the Second Strategic Highway Research Program Naturalistic Driving Study. Over 3,500 drivers volunteered to be filmed while driving during the study, with the footage being used to track a number of driver behaviors and crash causes. The AAA Foundation researchers used footage of drivers who were involved in an accident, examining the six seconds of footage immediately before a crash. The researchers looked for signs of drowsiness, specifically defined by sleep researchers to be the amount of time that a person’s eyes are closed within a specified period.

Drowsiness a factor in more crashes than previously known

Official federal statistics had assessed drowsy driving to be the cause of between 1% and 2% of all fatal accidents in the US each year. Many safety experts believed that the true rate was much higher, but believed the official percentage remained low since there isn’t always an objective way to tell whether a driver was drowsy when a crash occurred. The AAA Foundation’s research showed instead that drivers exhibited signs of drowsiness in up to 9.5% of all crashes. Further, drivers appeared drowsy in the moments before up to 10.8% of all crashes that caused injury, major property damage, or that resulted in airbag deployment.

Drivers who choose to get behind the wheel while severely fatigued are not upholding their duty to drive reasonably and may be held financially responsible for injuries they cause in a crash. With scientific support of the dangers of driving while fatigued, victims of injury accidents may seek to use evidence of a driver’s sleep habits, or eyewitness or security camera footage showing the driver nodding off, to support their claims.

If you’ve been injured in a crash with a drowsy driver in the Antelope Valley, get help seeking the damages you’re entitled to receive by contacting the seasoned and professional Palmdale personal injury attorneys at the Kistler Law Firm for a consultation on your case, at 661-206-6990.