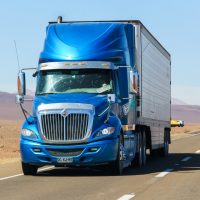 Semis, eighteen-wheelers, tractor-trailers and other large trucks are necessary and important parts of the national economy. Long-haul truckers serve an important purpose. Unfortunately, large trucks also create significant additional dangers for drivers on California roadways. If you find yourself in an accident with a large truck, it is important to get professional legal help from a truck accident lawyer who understands the nuanced differences between large truck crashes and a typical passenger car crash. Read on for a discussion of issues specific to truck accidents, and call a savvy Palmdale traffic accident lawyer if you or a loved one has been hurt in a large truck crash in the Antelope Valley.

Trucks are massive vehicles weighing thousands of pounds more than typical passenger cars. They have a wider turning radius, slower stopping time, and far more power. They are also more likely to tip over when taking a sharp turn or dealing with an icy or slippery road. When a collision involves such a large vehicle, it is far more likely to be serious or fatal. It is rare to have a minor “fender-bender” with an eighteen-wheeler. Moreover, the majority of serious injuries in truck crashes happen to people outside the truck–other drivers, passengers, bikers and pedestrians.

Hazards on the road

Semi-trucks are not only large; they are also likely to be carrying loose or heavy goods. Whether hauling lumber, heavy machinery, or dangerous chemicals, a truck’s cargo is likely to become an additional hazard on the road after a crash, if a lost haul was not the cause of the crash in the first place. Whenever you see a wrecked semi, or if you find yourself in a crash with a large truck, be on the lookout for additional hazards that might have spilled on the road as a result.

Identifying whom to sue

A typical passenger car crash involves two parties: the driver of each car. A crash may also involve claims from passengers or other people such as pedestrians. Large trucks, on the other hand, are generally used for commercial purposes. If a trucker negligently crashes into you or causes you to crash, you will likely have more than just the driver to include in your eventual lawsuit. The trucker may be driving for a freight company or they may own their own private business. The truck manufacturer may have made or installed a defective part. The truck’s haul may have been loaded negligently by a third-party contractor, causing the truck to lose balance or the load to come loose. It is important to have a savvy truck accident lawyer on your side who knows the right questions to ask and the right evidence to obtain in order to prove your injury claims.

Legal claims resulting from large truck crashes are likely to involve more complicated sets of law and fact than typical passenger car claims. Proving a truck driver or freight company was negligent requires a deep understanding of both federal and state trucking regulations, including safety regulations about securing loads, hours of service limits on trucker driving shifts, and others. If you are injured in a crash involving a large truck, make sure to hire a traffic accident lawyer who has a specialized understanding of trucking laws and regulations to ensure that you build your strongest case for maximum recovery.

If you or someone you care about has been injured in a large truck crash in California, talk to a seasoned and effective Palmdale truck accident lawyer about pursuing a claim for damages by calling the Kistler Law Firm at 661-206-6990.