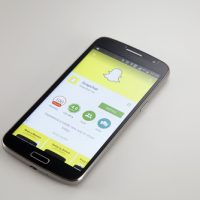 A man who claims that photo-sharing app Snapchat’s speed filter is unreasonably dangerous and caused his accident with a distracted driver is suing both the driver and the app’s creators for expenses related to his injuries. Safety groups have long decried the feature as unsafe and requested that Snapchat disable the speed filter, which measures the speed at which the user is traveling at the time a photo is taken and prints the speed on the photo.

Wentworth Maynard was driving for Uber on the night of September 10, 2015, when the accident occurred. Christal McGee, then 18, was out driving with three of her friends. Maynard claims that McGee was trying to get the speed filter as high as it would go, driving faster and faster up the highway. As Maynard attempted to enter the highway on which McGee was driving, McGee slammed into the driver’s side of his car. McGee claims that Maynard is responsible for the crash, having drifted into her lane without signaling. According to an accident reconstruction conducted by Maynard’s expert, McGee was traveling at 107 mph when she collided with Maynard’s Mitsubishi. Nevertheless, reports disagreed on McGee’s speed at the time of the accident, and neither driver received a citation on the night of the crash.

Maynard was transported immediately to the intensive care unit where, according to his attorneys, he would spend the next five weeks receiving treatment for a severe traumatic brain injury. He has been unable to return to work since the accident, cannot get around without the help of a walker or wheelchair, and has lost 50 lbs since the crash. McGee’s injuries in the crash were less severe. As she was being wheeled into the hospital strapped to a gurney, McGee was able to take a selfie which she shared to Snapchat with the caption “Lucky to be alive.” Maynard’s attorneys released this photo to the media before filing the instant lawsuit, which spurred local police to open an investigation into the circumstances of the crash.

Maynard claims that Snapchat was aware of the dangers presented by the speed filter, but nevertheless refused to disable the filter. Maynard argues that, since Snapchat was aware that other accidents had been caused by users of the speed filter, the fact that they continued to enable use of the speed filter and generate revenue from users of the filter makes the developers liable for resulting injuries. Snapchat claims that their warning to users not to “snap and drive” is sufficient to relieve them of any additional duties to protect users from dangers presented by the filter.

If you need legal assistance in recovering money damages from accidents with negligent or distracted drivers in Southern California, contact Palmdale personal injury attorney Paul Kistler for a free consultation on your case, at 661-206-6990.