Driver Flees Victorville Crash, Causes Another Crash Killing Himself and Another 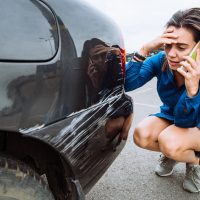 Fleeing the scene of an accident is not only illegal; it is also dangerous. Leaving the scene without reporting the accident can delay emergency response time, potentially causing greater injury to anyone hurt in the accident and increasing the chances that a victim dies as a result. The panicked flight from an accident can also lead to more crashes and destruction. A Victorville man recently proved this point in the worst possible fashion by fleeing from a minor crash and subsequently causing a second, fatal accident. Continue reading for details about the accident and California’s hit-and-run problem, and reach out to a dedicated Palmdale auto accident attorney with any questions about possible personal injury claims in the Antelope Valley.

Around 6:47 a.m. on a recent Saturday morning, Victorville police and other officials responded to reports of a crash at the intersection of Luna Road and Highway 395. The male driver of a 2018 Honda Civic reportedly ran a red light and crashed into a silver 2007 Mercedes Benz, killing the woman driving the Mercedes. A passenger in the Mercedes was airlifted to a nearby trauma center in critical condition.

Another driver added to the story: An Adelanto man was driving his white Dodge Challenger eastbound on Palmdale Road, waiting at a red light when he was rear-ended by the Honda Civic. He gestured to the Honda driver to pull over; the driver feigned as though he would, but then sped off onto the 395. The Honda was driving recklessly, speeding and lane straddling, according to cell phone footage captured by the Adelanto man. The Civic driver sped through a red light at the intersection with Luna Road, t-boning the Mercedes. The Civic driver was pronounced dead at the scene.

Despite increased safety regulations and advances in auto safety technology, hit-and-run accidents have been on the rise nationally over the past 10 years, and in California especially. California, unfortunately, has the dubious honor of having the highest number of fatal hit-and-run crashes annually, according to data from AAA’s Foundation for Traffic Safety.

Get Serious Legal Help after a Palmdale Auto Accident

If you have been hurt in an Antelope Valley hit-and-run accident or other car crash, contact a skilled and passionate Palmdale personal injury attorney about pursuing a claim for damages by calling the Kistler Law Firm at 661-206-6990.