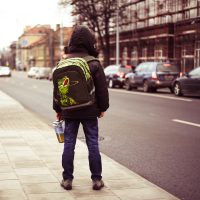 According to a study conducted by the National Center for Statistics and Analysis, there were 8,000 injuries and 207 deaths in car accidents involving child pedestrians in 2014. You may have spent hours teaching your small children how to safely cross the street, especially if you knew that they would need to get themselves home from a bus stop or school on their own. Despite your careful instruction and your children’s best intentions, new research shows that young elementary school-aged children may simply lack the neurological capacity to cross the street safely. Read on to learn more about child safety while crossing the street.

The study was conducted by researchers at the University of Iowa, using their advanced traffic simulation lab. The lab provides participants with an immersive virtual reality experience of crossing a single lane of traffic, where the cars move at 25 mph. According to the study’s first author, Elizabeth O’Neill, the simulation is so realistic that they “often had kids reach out and try to touch the cars.” The researchers used child subjects aged 6, 8, 10, 12, and 14, as well as several adults as control subjects, to test the ability of children to safely and accurately gauge whether it was safe to cross a street that lacked a traffic signal or crosswalk.

The researchers found that the ability to accurately assess gaps in traffic so as to cross the street safely was underdeveloped in the youngest participants. In 8% of all street crossings, 6-year-old subjects were “hit” by the simulated vehicles, whereas 8-year-olds were hit 6% of the time and 10-year-olds hit 5% of the time. The ability to safely judge traffic improved as children entered adolescence; 12-year-olds were hit only 2% of the time, and no 14-year-old study participant was hit by a simulated car.

The researchers explained that crossing traffic requires that the pedestrian both accurately gauge the length of the gap in traffic and the speed of the oncoming vehicles, as well as the speed with which they would need to step into the street in order to get across in time. The researchers noted that, while the youngest participants had some difficulty accurately determining the size of the gap in traffic, they were more likely to choose an appropriate gap but fail to step into the street quickly enough to make use of the gap. This appears to be due to underdeveloped motor skills on behalf of the young children.

In order to keep children safer while crossing the street, parents should instill the importance of crossing at intersections with a traffic signal, or crossing only with an older friend. If traffic signals or marked crosswalks aren’t available on streets where children regularly cross, parents should speak with municipal government about installing a crosswalk to protect the lives of the children who regularly cross.

If you or your child has been injured in a pedestrian accident in the Antelope Valley or throughout Southern California, contact the experienced and dedicated Palmdale personal injury attorney Paul Kistler for a consultation on your injuries, at 661-206-6990.