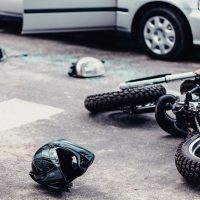 In a very unfortunate illustration of the old adage “No good deed goes unpunished,” a woman suffered “major” injuries recently when she was struck while attempting to help out victims of a motorcycle crash. The chain-reaction accident ended up as a multiple-vehicle pileup, injuring several and killing at least one person. Read on for details about the accident, and contact a seasoned Lancaster auto accident attorney with any questions about possible personal injury claims in the Antelope Valley.

Late on a recent Saturday night at around 1:30 a.m., a red pickup truck heading eastbound turned left at the intersection of Avenue I and 15th Street East in Lancaster. The truck turned just as a motorcycle heading westbound on Avenue I was attempting to cross the intersection. The truck collided with the bike and rider. The truck ended up on top of the motorcycle, trapping the rider underneath. The bike and truck were severely damaged. Several people, including a police deputy, heard the crash and rushed over to try to help the motorcyclist.

Unfortunately, tragedy struck twice: Another vehicle then came through the intersection, hitting several parked cars and pushing them into a woman who had joined those trying to help the motorcyclist. The woman was taken to Antelope Valley Hospital in critical condition and with “major injuries,” according to officials. The motorcyclist, a Lancaster man in his mid-30s, was pronounced dead at the scene. Police were investigating the cause of the accident but did not immediately determine whether drugs or alcohol were involved.

We have previously discussed the prevalence of motorcycle crashes across the country and in the state of California in particular. Motorcycle fatalities occur at a rate that is 28 times higher than crashes involving other types of motor vehicles. While the rate of fatal motorcycle accidents may be decreasing as of the past couple of years, motorcycles remain dangerous for both riders and others on the road. Any slip-up by the rider or by other motorists can yield deadly results.

Get Serious Legal Help after a Lancaster Auto Accident

If you have been hurt in an Antelope Valley hit-and-run accident or other car crash, contact a skilled and dedicated Lancaster personal injury attorney about pursuing a claim for damages by calling the Kistler Law Firm at 661-206-6990 for a free consultation.